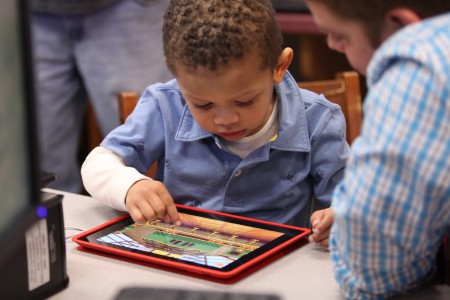 What if children’s media could be as educational as it is entertaining? That’s the goal of the U.S. Department of Education’s Ready to Learn Television (RTL) Program that supports the creation of new educational television and digital media that educates students as it engages them. From 2010 to 2015, the RTL Program has supported three large national projects to create educational television and digital media products for young children, ages 2-8 to learn math and literacy skills. Now, the findings from these grants are being featured in a newly released report issued by Northwestern University’s Center on Media and Human Development and in a special section of the latest issue of the Journal of Children and Media (see links below).

Today, new television shows are released in combination with a variety of accompanying digital media such as interactive websites, mobile apps, or e-books. What made the Ready to Learn grants unique when they were funded in 2010 is that they pushed one step further and tried to connect these different media with common storylines or problem-solving, and then explored whether this “transmedia” approach might result in increased educational effectiveness when used with learners from low-income backgrounds.

The supposition was that different learning platforms have different strengths – for example, television excels at linear storytelling, while interactive games create opportunities to practice new skills.   And the connections between these platforms were expected to motivate students to work their way through a greater variety of content, to encounter a richer variety of learning strategies, and to better link experiences in the home, in school or pre-school, and “on the go.” As grantees experimented with different approaches, the Department encouraged each project to conduct rigorous research about their impact on students’ learning.

Across the RTL evaluations, researchers generally found positive results when using RTL-produced transmedia products. For example, in one randomized controlled trial conducted by EDC and SRI studying the use of PBS KIDS’ “Peg+Cat” transmedia among 4- and 5-year olds in home and family environments, children using the “Peg+Cat” intervention showed significant improvements on math skill areas such as ordinal numbers, spatial relationships, and 3D shapes (To learn more about the “Peg+Cat” study, see: http://pbskids.org/lab/research/summative-evaluationsimpact-studies/). This kind of evaluation represents the “gold standard” of research, and very few educational strategies show measurable gains when evaluated in this way—especially in educational technology.   Because so few educational technology interventions show significant gains in impact studies, it is especially encouraging that RTL studies like this one yielded positive results.

Perhaps just as interesting, though, were the findings in this study that parents and caregivers spent more time jointly using media with their children, engaging together in problem-solving, and finding ways to connect their experiences to daily life.   In this instance at least, screen time resulted in positive play and social interaction, not the kind of passive experiences that many parents fear when monitoring their children’s television viewing. That means that the impact wasn’t limited to the child and the screen; this approach encouraged parents, caregivers and children to spend more time learning together.

The new report by the Center on Media and Human Development at Northwestern University entitled “The Ready to Learn Program: 2010-2015 Policy Brief” provides a summary overview and independent analysis of the findings from all of the studies produced under RTL funding during the past five years.

The report is authored by the Center’s Director Ellen Wartella and two of her colleagues, Alexis Lauricella and Courtney Blackwell. It is based on a review of RTL-produced research studies and interviews with key participants.   In addition to synthesizing some of the key research findings across the three projects, the report discusses the importance of these findings within the context of educational media research, and offers some recommendations for researchers, practitioners, and policy makers going forward. It can be found at http://cmhd.northwestern.edu/wp-content/uploads/2016/04/RTL-Policy-Brief-2010-2015-Wartella-et-al-FINAL-March-2016.pdf.

The special section of The Journal of Children and Media is entitled “Transmedia in the Service of Education” and it collects six papers by grantees and evaluators of the RTL grants. In these papers, guest edited by Shalom Fisch, the President of MediaKidz Research and Consulting, the authors describe their experiences creating educational transmedia, implementing community-based outreach programs in underserved communities, the role of evaluation research in the RTL projects, and pilot efforts exploring the role of analytics to track learning progress. The papers can be found in the “commentaries” section of Volume 10, Issue 2 and are available for free download during the month of April 2016 at http://www.tandfonline.com/toc/rchm20/current.

It’s easy to forget that when the recently concluded Ready to Learn grants started in 2010, the iPad had not yet been introduced, and now we have a variety of convergent devices that can play video content, run interactive learning games, and be used “on the go.” It is no longer quite as necessary to use different devices for different purposes; increasingly, we are now using a variety of different devices to access the same content at our convenience. In the middle of this round, RTL producers noted this shift and began to create longer, more integrated learning experiences that are able to incorporate a variety of learning strategies without requiring children and their parents to move from one device to another.

This will make it easier in the new round of RTL grants (2015-2020) that are just underway to build upon what has been learned about how to produce engaging, educationally meaningful content that works across multiple platforms. These new projects will be able to leverage these important lessons learned, while focusing their attention on newer matters such as the use of analytics to collect learning data and to enable more personalized delivery of content. We look forward to sharing results from these efforts in the future.