That Mom of That Kid Saved by That School 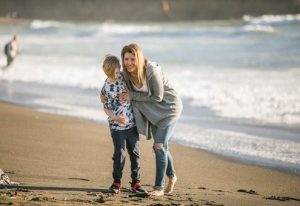 As a single mom raising a high-needs child with several diagnoses, I have always struggled with childcare. My son’s behavior issues went undiagnosed by his school for nearly two years.  Parents, teachers and peers commonly knew my son as That Kid, and while I had a hard time with this for years, I have finally embraced our starring role as the mother/son duo as the mom of That Kid.

I couldn’t afford a nanny so my son attended in-home daycare centers or preschools. When he started elementary school, he also needed one-on-one care after school, but the on-campus after-school program was all I could afford.  When teachers’ communication required non-literal interpretation, my son believed that his way of thinking was somehow wrong. He would act out in frustration and his reactions to not being understood made their way through the grapevine, which only reinforced the idea that he was disruptive or disrespectful.

There were parents who wanted us to leave that program, even campaigning to make this happen. Sadly, this is all too common for That Kid. People can’t see past what stands out the most: the bad behavior. They couldn’t see that behind the dysfunctional behavior, there is a scared, struggling little 5-year-old boy who needed help handling his emotions because his brain is wired differently.

Our school district ultimately placed my son in a non-public school that did not focus solely on academic scores, but also on the importance of student social and emotional growth. The school has been a life-changer for us. I found my people.  At my first Parents’ Night, I was chatting with other parents about the past: frantic school calls, meltdowns and the various types and sizes of screens their children had smashed. We discussed the diagnoses, and at what point we decided to try medication (contrary to popular belief, this is usually an agonizing decision).

I felt like I had found a secret club. There was no judgment here, just sympathetic nods of understanding and knowing glances.  There are no fingers pointed because we get it.  We don’t call another parent to offer unsolicited advice. During this Back to School Night conversation, I felt brave enough to blurt out, “I’m happy it wasn’t my kid doing the damage today.” The understanding smiles from other parents brought tears to my eyes. Finally, we were accepted.

It was at that moment I embraced this remarkable life. For the first time, I had something in common with some of the wealthiest families of Silicon Valley. Behavior disorders, mental health issues, ADHD, HF ASD, ODD, SPD that represent That Kid do not discriminate.

Your professional status will not spare you and neither will the size of your home, the type of car you drive, your marital or educational status. Our bumper stickers don’t say “Perfect Attendance” or “Honor Roll.” Ours would say, “Honk if Your Child Hasn’t Hit You Today” or “We Brake for Sensory Breaks” or better yet, “Proud Imperfect Parent of an Imperfect Student.”

I am that parent.  I am a two-antidepressant and one-anxiety medication type of imperfect parent. More than I like to remember, I lost my temper with him before I understood what was going on in his world, and that the seam in his sock felt like a rock, and actually hurt.

As parents of That Kid, we deserve more compassion. We shoulder a lot; we are guilt-ridden; we feel shame. We dread having to leave work at the last minute to pick up our child from school. I remember one teacher at our old school telling me, “You’ve got to try not to show him you’re stressed.” Thanks I thought. It’s not so easy when you always give me a rundown of every little thing that he’s done that doesn’t fit in your box of “good student.”

At the Esther B. Clark School at the Children’s Health Council in Palo Alto, California my son doesn’t feel like he is out of place. It’s a school where kids get the message: It’s okay not to be perfect. It’s okay to have strong feelings. We are here to help you with those. I have witnessed children at this school developing more compassion for their peers than I have seen from many adults who encounter a child having a meltdown.  I wish more schools were working to understand the reasons behind a child’s behavior, not solely focusing on the result of the behavior, which in turn makes them a classroom or school spectacle.

At Esther B. Clark, if a student is “off task” (this term is used to replace traditional words like “misbehaving”), staff swiftly and calmly step in and handle the situation with consistent, clear words, redirection and consequences. These are things, even the saintliest parents have a hard time carrying out in a calm, consistent manner. Kids push boundaries and behavior escalates more at home. This has made the pandemic especially trying for parents of special and high needs students. We haven’t had the one-to-one support systems the school provides for our children. Many parents noticed a plateau or a regression in their children’s behavior during the shelter in place, which pushed us to our own personal emotional limits.

My son has been back in the classroom walls for almost seven weeks and it’s made a world of difference. As a parent, I received a break from juggling working from home and not only being a teacher, but also a behaviorist and therapist; something I’m not qualified to do. I have seen a turnaround in behavior and attitude. My stress levels are starting to come down, and my patience thresh hold is increasing.

If there is one silver lining has come from the pandemic, it may be that it has exposed all of our vulnerabilities and need for compassion. Maybe this experience will make us look a little differently at each other, with more kindness, acceptance and empathy.