OESE » Offices/Programs By Offi... » Office of Administration » About Us » Senior Leadership Biogra... 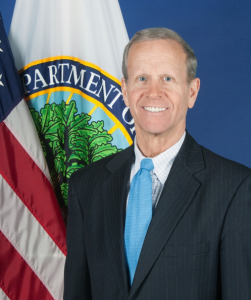 Frank T. Brogan was confirmed by the U.S. Senate as Assistant Secretary of the Office of Elementary and Secondary Education (OESE) on June 25, 2018.

Brogan began his education career in 1978 in the Martin County, Florida public school district. His first job was teaching fifth grade at Port Salerno Elementary School. It was while teaching at this school that he earned his Master of Arts in Educational leadership from Florida Atlantic University in 1981.

Brogan next focused his career on educational administration. He went on to serve as the Dean of Students at Indiantown Middle School, and then assistant principal, and principal of Murray Middle School. While an administrator, Brogan negotiated a gun away from a student. Brogan was eventually elected to two terms as the Superintendent of Schools in Martin County.

In 1994, Brogan was elected Florida Commissioner of Education. In this position he oversaw all education activities in Florida and served as a member of the Florida Cabinet, which oversaw various aspects of state government. He was the youngest education commissioner in Florida’s history.

Brogan was seeking a second term as Education Commissioner when, in 1998, Jeb Bush asked him to be his running mate as lieutenant governor. The Bush/Brogan team won the general election. As lieutenant governor, Brogan oversaw education policy and acted as legislative liaison for the Bush Administration. Bush and Brogan were re-elected in 2002; Brogan departed to become president of FAU in 2003.

Brogan became the fifth president of Florida Atlantic University in 2003 and was reappointed by the FAU Board of Trustees to a second six-year term, which began in 2009, although Brogan quit this position the same year to become Chancellor of the State University System of Florida. Recognizing the region’s strong potential to become a center of biomedical research, Brogan has placed special emphasis on creating partnerships between the University and leading research organizations.

Brogan took office as Florida’s university system chancellor in 2009 during a time of deep acrimony between the Florida Legislature and the Board of Governors. As the longest-serving chancellor since the creation of the Board of Governors in 2003, his tenure brought a welcome stability for the system. During his tenure, relationships with the Florida Legislature were restored, as evidenced by the landmark governance agreement of 2010 that provided clarity regarding oversight of the university system.

The board approved a new 2025 Strategic Plan that includes 39 key performance benchmarks, which is an integral part of Florida’s nationally recognized accountability framework that tracks progress of university and system goals. This was part of Brogan’s goal for Florida to have “the most accountable university system in America.”

During the 2013 legislative session in particular, the university system took several major steps toward further excellence. The board and Legislature worked together to implement a number of top priorities, including establishing a path for universities to reach preeminent status, creating the nation’s first fully online institute operated by a public research university, and providing a platform for a performance-funding model that fosters the unique mission of each institution while advancing system goals. The state legislature reversed an earlier $300 million budget cut and added more than $400 million in new funding for operations, facilities and maintenance. 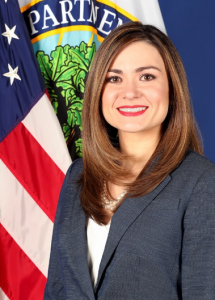 Aimee Viana serves as Principal Deputy Assistant Secretary for the Office of Elementary and Secondary Education.

Previously, Viana was the senior executive director of the Secretariat for Lay Formation, Marriage, and Family Life for the Catholic Diocese of Raleigh, North Carolina, serving a population of nearly 500,000 individuals. In this capacity, she implemented, led, and managed a new organizational structure and facilitated, in both English and Spanish, a leadership team focused on community support for children and families, youths and young adults, married life, and adult formation. Viana also administered the Hispanic, African ancestry, and Native-American ministries, among others. Viana focused on improving her team’s cross-functional performance, alignment, and accountability to its diverse constituents. She also collaborated to develop, initiate, and host the weekly Spanish-language internet news brief “Desde Raleigh a Roma” to further engage stakeholders through social media.

Previously, Viana served as a school principal and assistant principal, including at a U.S. Department of Education Blue Ribbon School of Excellence. As a school leader, Viana endeavored to provide a quality learning environment and foster a school culture that sustained high expectations and respect for all. She was committed to academic excellence through the continuous improvement and collaborative relationships with parents and the community.

Viana was honored as a top middle school principal in Western Wake County (North Carolina) by Cary Magazine in 2016. She was also recognized by Latino American Who’s Who in 2012 for her achievement in advancing the culture of the Latino-American community.

As a former elementary and middle school teacher, Viana fostered individual student development and support of families. She began her teaching career in Miami-Dade County Public Schools (Florida), serving a large percentage of Hispanic students, and went on to teach Spanish to middle school students in North Carolina.

A daughter of Cuban immigrants, Viana holds a Bachelor of Science degree in elementary education, with endorsement to teach English as a second language, and a Master of Science degree in early childhood education—both from Florida International University in Miami, Florida. She completed the School Leaders Program at Florida Atlantic University, and is certified in educational leadership with specialization in K–12 school-site supervision. Viana holds teaching certificates in pre-K through elementary education, K–12 English as a second language, Spanish K–12 education, and school administration. Viana lives in northern Virginia with her husband and their three children. 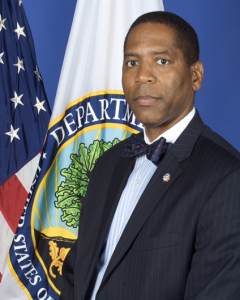 Mark Washington is a member of the Senior Executive Service, and is the deputy assistant secretary for management and planning, in the Office of Elementary and Secondary Education, of the U.S. Department of Education.

In this role, he is responsible for the management and operations of the principal organization that directs policies, programs and funding that impacts most of the elementary and secondary education field.  This includes a grant portfolio of over $22 billion authorized by the Every Student Succeeds Act for programs such as Title I, the largest federal commitment to K-12 education.

He is also the lead federal career executive of the Federal Task Force on Underserved Youth, responsible for transitioning former President Obama’s My Brother’s Keeper initiative, in collaboration with the current President Trump’s administration.

Washington is a longtime career employee of the Department, serving longest in the Office of Federal Student Aid (FSA).  He began his career there as a policy analyst for the student aid programs, and subsequently transitioned to a variety of other roles, including executive management in the immediate office of the chief operating officer, program management for Business Operations, director of FSA Facilities, Security and Emergency Management operations, senior advisor for employee engagement, and deputy chief administration officer in FSA’s Administrative Services division.  Washington is noted for his role in strengthening FSA’s nationwide staff protection and law enforcement program, and as a principal architect of the FSA First Class employee engagement programs, which continue to be a hallmark in effective partnerships among employees, management, and union leaders.  He also served for a year as the Department’s acting chief administrative officer and acting performance improvement officer.  In those roles, he had overall responsibility for performance management, human capital management, employee engagement, risk management, and small business utilization.

Prior to joining the Department, Washington pursued a fiscal career and held positions at various organizations, including the audit, tax, and advisory services firm KPMG, the human rights organization Amnesty International of the USA, and several other non-profit entities.  He was the director of financial aid at Oakwood University (Alabama) immediately before joining the Department. 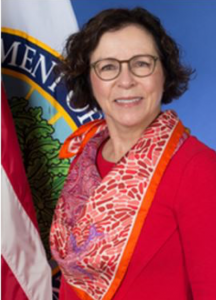 Ruth Ryder is the Deputy Assistant Secretary for the Office of Policy and Programs – Formula Grants in the Office of Elementary and Secondary Education (OESE) at the U.S. Department of Education.  OESE has responsibility for implementing programs under the Elementary and Secondary Education Act as amended by the Every Student Succeeds Act, in this role, Ms. Ryder oversees a broad range of management, policy, and program functions related to formula and discretionary grant programs under the ESEA.

Ms. Ryder was previously the deputy director of the Office of Special Education Programs in the Office of Special Education and Rehabilitative Services, which she joined in 1988. In that position, she provided national leadership for moving special education accountability to a more results-oriented focus.  In addition, Ms. Ryder focused attention on ensuring that the needs of children with disabilities were addressed in the major initiatives of the Department, such as the Every Student Succeeds Act, family engagement, school climate transformation and early learning.

Prior to joining the Department, Ms. Ryder was a program administrator in a Washington state school district. There she had responsibility for the Elementary and Secondary Education Act Title 1 and Title II programs, state-remediation, gifted education, outcome-based education, and state- and district-wide testing programs.  She also administered an ED-funded demonstration project, examining integrated service delivery models for including children with disabilities in general education.  Additionally, Ms. Ryder has been a special education consulting teacher and a general education classroom teacher.  Ms. Ryder has a bachelor’s degree in psychology and elementary education and a master’s degree in special education. 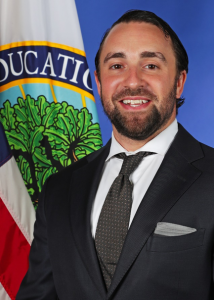 Chris Rinkus Chris Rinkus is the Deputy Assistant Secretary for Evidence-Based Practices and Policy. In this role, he leads the planning and policy development for the Office of Elementary and Secondary Education, which includes over $20 billion in annual grants to states and school districts in order to improve K-12 education. Additionally, he helped lead the approval process for state plans submitted as part of the Every Student Succeeds Act (ESSA), which established long-range goals, accountability systems, and intervention strategies for every state in the US.

Earlier in his career, Chris helped transform the District of Columbia Public Schools into the fastest improving urban school district in the country. He introduced a new, ambitious growth strategy that led to the largest gain in student enrollment in the school district in 50 years. On its front page, the Washington Post described this effort as, “an aggressive move to boost enrollment and maintain market share after years of ceding ground to charter schools.” He also implemented an innovative redesign of the school district’s $500 million budget that resulted in greater support for low-income students and more resources to the classroom.

Before joining the Department of Education, Chris was a senior consultant at an early stage technology company that provided strategic financial management services to urban public school districts. He managed the company’s east coast business, including business development, implementation, and customer success.