Fostering innovation requires setting up conditions for innovation to flourish. Last month, we held the first Education Foo Camp (or Ed Foo) at the Googleplex in Mountain View, CA to do just that. Ed Foo was an “unconference” organized by Google, the U.S. Department of Education, Macmillan Publishing, O’Reilly Media (Foo stands for Friends of O’Reilly), Sesame Street and Scientific American that brought together bright thinkers to brainstorm solutions to tough challenges in public education.

At Foo Camps, which have been organized around a variety of different topics, no agenda is set before participants arrive. The campers set the agenda, which remains fluid throughout the weekend, so that participants can invest more time and energy in emerging and promising areas. The format of the events is flipped, so that they minimize presentations and maximize engagement, discussion, spontaneity, and innovation. The goal is to create a weekend-long incubator for creativity.

The journey to creating an education themed Foo camp began when I was invited to attend a Science Foo Camp (Sci Foo) at Google in 2015. It was a profound experience that brought together diverse groups of scientists, technologists, authors, media, and other experts across multiple disciplines to discuss key issues and form new collaborations that apply fresh eyes to possible solutions. When stakeholders come to the table motivated by the issues that matter to them most, innovation, rejuvenation, and new collaborations are the result.

Improving STEM education was one of the major areas of discussion at Sci Foo. I moderated a pop-up session on STEM education, which led to deeper discussions about increasing active learning experiences for students, and highlighted a new program by Google on providing expanded access to maker spaces. That session led to a collaboration on a pilot program that will help place Maker Spaces in underserved communities while identifying best practices for implementing similar programs in the future. This was just one of many discussions that led to further activity after the event. Attendees came away energized, refreshed and ready to tackle new challenges.

As I was leaving, I commented to the organizers that it had been a useful activity, but I wondered what the impact would be if we had an entire Foo camp devoted specifically to education. Why not have a concentrated weekend for thinking about innovation and how to create a nation of lifelong learners? A few months later we discussed the notion again at the Scientific American/Macmillan STEM Summit in NYC. Google graciously stepped forward and offered to host the first Ed Foo Camp along with O’Reilly Media, Macmillan, Scientific American, Sesame Workshop and the STEM Office at the U.S. Department of Education.

Our first Ed Foo was attended by approximately 250 educators, administrators, technologists, funders, researchers, media, and toy manufacturers. We also included innovators from outside the education community. Campers convened early in the morning and were still actively discussing education ideas and possible collaborations long after midnight. Few were ready to leave on Sunday. Sessions covered numerous topics as people gathered in small conference rooms, around tables, and even around a fake campfire. The discussions covered topics ranging from what preschools might look like in the future and the role of making and makers in education to programs for autism, the future of virtual reality, education videogames, and promoting computer science from preschool to college. There were also some overriding themes that emerged. Many discussions explored how to maximize active learning experiences inside and outside the classroom, the need to engage parents, and the need to think about the role and challenges of using technology for improving diversity and equity in education, particularly in the STEM fields.

We’re still hearing from participants about the many follow-ups that have already been scheduled to explore collaborations and to continue learning from each other. We’ve received feedback from many campers that this was one of the most useful education events they’ve ever attended. Most importantly, we are already discussing how we might improve the experience in the future. Here in the STEM office, Ed Foo is already bearing fruit, as we support the Administration’s initiatives to bring quality computer science and STEM to all students, provide more active learning experiences through making, and promote quality STEM education starting in preschool. Meanwhile, the organizing committee is assessing what worked and what needs to be improved for future gatherings. Hopefully, this will be the first of many Ed Foo events and will also be a model for other events aimed at promoting innovation.

The President’s State of the Union address and the recent announcement of the “Computer Science for all,” initiative underscored the National importance of Science, Technology, Engineering, and Math (STEM) education and the critical role that Computer Science (CS) plays in the Nation’s schools and economy. To support this effort, the President’s budget for FY 2017 proposes over $7 billion for STEM and CS education activities. The FY 2017 budget builds upon the Administration’s commitment to increasing the Nation’s STEM competency. For example, the Department of Education (the Department) provides several opportunities for the STEM community to compete for funding through the Department’s discretionary grant programs. For more information on the FY17 Federal STEM budget, please see the White House Fact Sheet on STEM.
END_OF_DOCUMENT_TOKEN_TO_BE_REPLACED

Today as part of the U.S. Department of Education’s (the Department) commitment to transparency, the Department’s Charter Schools Program (CSP) released a dataset showing all grants awarded since 2006 for the planning, initial implementation, and replication of public charter schools across the nation, as well as for dissemination and expansion. The dataset provides new and more detailed information on the over $1.5 billion1 that CSP has provided, since 2006, to fund the start-up, replication, and expansion of high-quality public charter schools in almost every State with public charter schools. CSP funding has served as a critical resource to expand access to high-quality public education opportunities across the country—particularly for students living in poverty—and the Department believes that sharing CSP data is an important step in better understanding CSP’s investments.
END_OF_DOCUMENT_TOKEN_TO_BE_REPLACED

This week, educators, students, and others all across the country are celebrating Computer Science (CS) Education Week.

All children can benefit from CS coursework, regardless of their intended career paths, because mastering computer science principles can help students develop foundational problem-solving skills and other key aptitudes. But, despite the value in learning CS, less than one-quarter of students nationwide have access to rigorous CS courses. We need to do more to increase educators’ awareness of and students’ equitable access to these courses.

END_OF_DOCUMENT_TOKEN_TO_BE_REPLACED

Russell Shilling is the Executive Director of STEM in the Office of Innovation and Improvement.

G.K. Chesterton captured the essence of early-childhood when he said, “Fairy tales say that apples were golden only to refresh the forgotten moment when we found that they were green.” Every child is imbued with a sense of curiosity and wonder. They are born scientists, engineers, and creators ready to discover the world at every turn. The goal of education should be to sustain this engagement throughout a lifetime.
END_OF_DOCUMENT_TOKEN_TO_BE_REPLACED 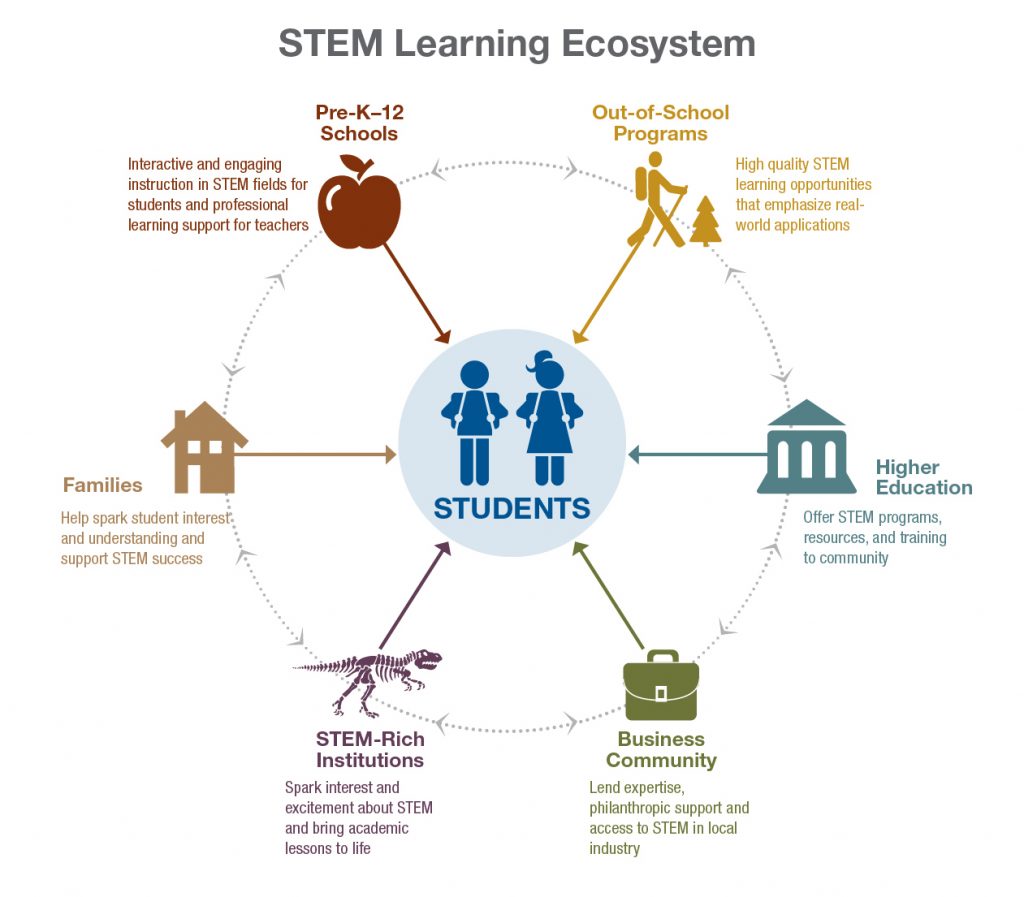 Diagram created by the Department of Education for the purposes of
illustrating the potential anchor organizations of a STEM learning ecosystem.

Cultivating a creative workforce that is ready to step into science, technology, engineering and math (STEM)-related fields is vital. Students need technical knowledge in these subjects, as well as critical-thinking, problem-solving, and analytical skills; these tools will prepare them for tomorrow’s jobs. But it’s not just schools that are thinking about how best to engage students.

Last week, the White House hosted the first gathering of the STEM Learning Ecosystems Initiative, a new initiative designed to bring STEM to life for young people in real-world, high-quality and engaging ways. A STEM learning “ecosystem” creates connected learning opportunities for students throughout their community, both within and outside of school.

END_OF_DOCUMENT_TOKEN_TO_BE_REPLACED

Posted by Melissa Moritz, Deputy Director of STEM, US Department of Education

This past week, Secretary Duncan highlighted the critical role of educators in “leading efforts to transform students’ lives.” As the Deputy Director of STEM here at the Department of Education, part of my job is to ensure we’re doing all we can to support educators, particularly those teaching in the critical fields of science, technology, engineering and math. In classrooms throughout the country, outstanding teachers are preparing students in these subject areas, giving them the support and tools they need to meaningfully contribute to their schools, communities and workplaces. We want all kids to have classrooms like that every year and to make that happen, we need more of these teachers.

END_OF_DOCUMENT_TOKEN_TO_BE_REPLACED

When Renton High School, just south of Seattle, began making International Baccalaureate (I.B.) courses the default curriculum for juniors and seniors two years ago, some in the community weren’t sure that was a good idea.

“We had to do a lot of training and had to change mindsets in some cases,” said Damien Pattenaude, Assistant Superintendent of Learning and Teaching for Renton School District and former principal of Renton High School.

The vast majority of the high school’s students come from low-income families of color, and most of them had not previously had access to the kind of rigorous, college-preparatory courses the I.B. program offers. But Pattenaude and the Renton team were determined to change that.

END_OF_DOCUMENT_TOKEN_TO_BE_REPLACED

Mentors can play an important role in supporting students’ success—whether they are near-peer mentors serving as role models for young students, or trusted adults and community leaders. That’s why a number of the U.S. Department of Education’s initiatives, including My Brother’s Keeper, leverage the power of mentors as key supporters and champions in students’ lives [to learn more about how to become a mentor, please click here].

One way that mentors can support students’ academic careers is by helping them develop learning mindsets and skills. Although these skills are not a silver bullet for improving public education, they are essential to teaching and learning. Alongside parents and educators, mentors can play a key part in supporting students’ resilience, sense of purpose and growth mindsets. When students become frustrated by challenges in the classroom, for example, mentors can help remind them that their minds are like a muscle that grows through effort. And when students feel disconnected from their classrooms, mentors can help them see how what they are learning in school aligns with what they hope to accomplish in life.

END_OF_DOCUMENT_TOKEN_TO_BE_REPLACED

In 2012, IDEA won a Race to the Top – District (RTT–D) award aimed at personalizing student learning and closing achievement gaps. IDEA is also a past recipient of an Investing in Innovation (i3) grant and grants from OII’s Charter Schools Program. IDEA’s network serves approximately 24,000 students in 44 public charter schools across Texas. More than 90 percent are Hispanic, and a third are still acquiring English speaking, reading, and writing skills.

For nine consecutive years, 100 percent of IDEA’s graduating seniors have been accepted to college, and achievement scores have consistently been above the state’s average. We checked in with Tricia Lopez, IDEA’s Director of Special Programs, about what’s behind the network’s success and how the RTT–D grant has been helping the network meet its goals.